Trail of the Lakes Municipal Utility District of Harris County, Texas (the “District”), a political subdivision of the State of Texas, created in 1974, is located in Harris County, Texas, approximately 17 miles northeast of the central business district of Houston, Texas and approximately 3.5 miles southeast of Humble, Texas. Will Clayton Parkway divides the District about 3.6 miles east of U.S. 59 and is a major traffic artery for the District residents to U.S. 59 and George Bush Houston Intercontinental Airport. The District is within the extraterritorial jurisdiction (ETJ) of the City of Houston. The District contains approximately 813.365 acres of land.

Approximately 438 acres have been developed as the single family subdivisions of Atascocita Forest, Sections 1, 2 and 4 through 26 (2,006 lots), approximately 57.5 acres have been developed as The Park at Atascocita Forest, Sections 1 through 3 (205 lots), approximately 79.5 acres has been developed as Clayton’s Park, Sections 1 – 6 (491 lots) and approximately 31.2 acres has been developed as Clayton’s Park East, Sections 1-2 (152 lots). The District also contains two recreation centers, one consisting of a swimming pool, a pool building, three (3) lighted tennis courts, and park facilities and the other consisting of a swimming pool and pool building; a retail center with a Kroger Center and various other retail stores; a Bank of America; a Sonic Drive-In; a Starbucks; a Valero Gas Station and Corner Store; a Shell Food Mart; a Walgreens; a Neighborhood Wal-Mart; SelfStorage Units; an 11.2 acre multi-family apartment complex; an elementary school; and a middle school. Construction of homes began in the District in 1974, and as of August 2, 2018, the District contained approximately 2,794 completed single family homes, 15 single family homes in various stages of construction and 45 vacant lots. The District presently contains approximately 12.34 acres of developable but undeveloped land. 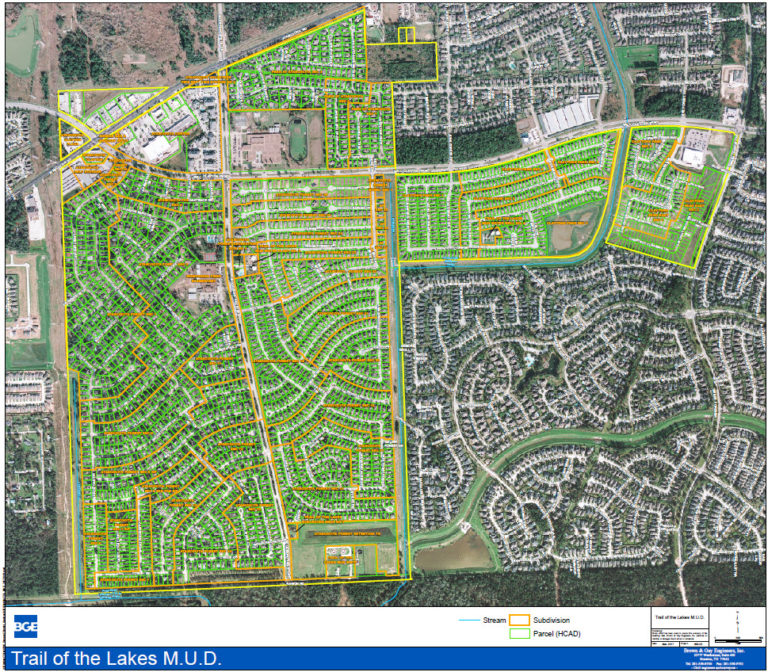 The Board generally meets on the last Monday of the month at noon at the offices of Radcliffe Bobbitt Adams Polley PLLC, 2929 Allen Parkway, Suite 3450, Houston, Texas 77019.

For persons with questions or needing help regarding website accessibility, or to request the provided information in alternative formats, please call (713) 237-1221.